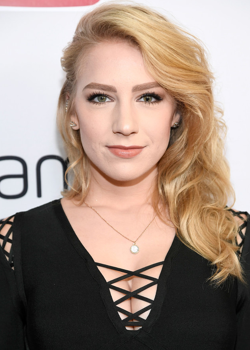 Courtney Miller is one of the allies of EATL Films. She is also rumored to be one of the upcoming actors in The Railway Series, portraying the role of Marion.[1]

Miller was born in 1995 in Oak Park, California. Following high school, she attended community college classes. However, she dropped out of college and had to work in a pharmacy, in favor of a career in the arts. Soon after, Miller went into a film internship which prepared her for a career in film and digital media. On March 21, 2013, Miller launched her own Vine account and started to gain recognition following the release of a vine called "Let me see yo booty work #literally", in which she played the song Booty Wurk (One Cheek At a Time) by T-Pain and toward the end, showed her butt wearing glasses and talking on the phone as if her butt was actually working in an office.

Through Vine, Courtney met Olivia Sui who later got her a job with the YouTube digital company Smosh when they were recruiting new talent in mid 2015.

Since joining Smosh, Miller has been involved in writing for and acting in numerous sketches and shorts produced by the company. In September 2015, Miller and Sui began a new series with Smosh called Smosh's Seriously Super Stupid Sleepover. The episodes have consisted of the two, dressed in pajamas, doing different, random, most of the time odd, activites featuring an array of guests from other YouTube channels.

In 2016, Miller was a part of the major digital media event Smosh Live, a live sketch comedy show on Smosh's YouTube channel sponsored by 5 Gum. Following the live show, Miller was approached by Elijah Adams about portraying the character of Marion in the upcoming EATL Films series The Railway Series. It is currently unknown whether or not Miller has accepted the role.

Retrieved from "https://eatl.fandom.com/wiki/Courtney_Miller?oldid=7719"
Community content is available under CC-BY-SA unless otherwise noted.