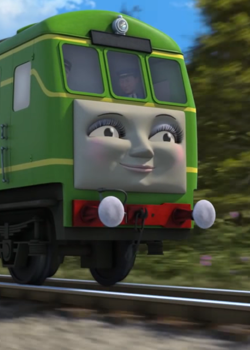 Daisy the Diesel Railcar is one of the supporting characters of Thomas & Friends. Daisy is a Diesel engine that was built especially for service on Thomas' branch line. When she first arrived, she was highly strung and would only carry passengers because she felt she was too good to pull cargo cars. Daisy soon learned that all work is important on Sodor, and now helps out whenever she can.[1]

Following a nasty accident, in which Thomas crashed into the Stationmaster's home at Ffarquhar, Sir Topham Hatt informed the engines on the branch line that a diesel railcar would be brought to the line to do his work. ("Thomas Comes to Breakfast")

A few days later, Daisy arrives on Sodor and is introduced to Percy and Toby at Elsbridge Station. Sir Topham Hatt orders the two engines to show her the engine shed. However, she is extremely hard to please and shudders when she arrives at the shed. Daisy goes on to exclaim that the shed is "dreadfully smelly" and anything smelly is bad for her swerves. So next they show her the carriage shed, which is more to her liking. The only problems are Annie, Clarabel and Henrietta, whom she calls rubbish. Percy and Toby then take the coaches away and spend half the night soothing their hurt feelings. The next day, Daisy goes to Elsbridge to take her first passenger train, but soon becomes indignant upon seeing that a milk van was to be coupled to her. She then blatantly refused to pull freight because it is "bad for her swerves". Soon, a shunter calls Daisy "feeble". That does the trick. So the van is uncoupled and Daisy purrs away feeling very pleased with herself. ("Daisy")

Daisy made rude remarks about Toby's cowcatchers and sideplates, and boasted about animals always running if she tooted and looked them in the eye. However, she was proven wrong when she came across a bull in her path. When the bull sniffed her, she was so frightened that she backed away and wouldn't go any further. Hence, Toby had to chase the bull off the line for her, where the farmer was waiting for him. ("Bulls Eyes")

Daisy was present during the meeting for the steam engines and diesels to settle their dispute. When Thomas finally made his speech about why they all needed to work together, she teamed up with Toby to collect workmen to take to the Airport. ("Calling All Engines")

After the completion of the Little Western expansion up to Harwick, Daisy is relocated to the new branch line to work alongside Ryan. Managing the passenger trains while he handles the goods and freight. Although she will still help out on the Ffarquhar branch if passenger duties aren't too busy on her line. For instance, when Thomas, Annie, and Clarabel were having trouble with a baby onboard, Daisy helped out with a local train.("Sodor's Legend of the Lost Treasure", "Thomas the Babysitter", "Ryan and Daisy", "The Railcar and the Coaches")

Following her relocation, Sir Topham Hatt decides to give both Daisy and Ryan more jobs because of their hard work, despite not even attending the morning meeting at Arlesburgh. Later, Ryan informs Daisy of her new duties to take a mail car behind her during her passenger runs. Daisy becomes indignant just as she did several years before with the milk van. She manipulates Ryan to help her out with some of her new passenger duties, saying how great he'll look and that he'll be really useful. Ryan is happy to help, but ends up running rather late to the quarry after delivering the mail. When Ryan returns to the yard, Daisy manages to convince Ryan to take her passenger train. The next day, Ryan sleepily picks up the coaches but her laziness backfires when Ryan takes on even more of her responsibilities and ends up causing confusion and delay. ("Ryan and Daisy")

The Fat Controller asked Daisy to take some special passengers to the holiday town of Harwick, but she decided that they were so special that she doesn't want to allow children eating ice lollies on board and refused to pull a dusty baggage truck. Without props or an audience, the puppeteers' Punch and Judy puppet show could not go ahead. With no time to go back to the station to get the props, the puppeteers put on their performance from one of Daisy's windows. ("The Way She Does It")

Later, Daisy was rude to Annie and Clarabel when she temporarily returned to Thomas' Branch Line. The coaches paid her back by convincing her she was falling apart, when there was actually nothing wrong with her. However, their plan backfired as Daisy panicked and abandoned them with their passengers at Maithwaite so she could "speak to a professional." She returned to Harwick soon after, and since Thomas was still in quarry duty at the time, Annie and Clarabel were left with an even worse substitute: Diesel. ("The Railcar and the Coaches")

This is a gallery of photographic stills released to promote the character.

Retrieved from "https://eatl.fandom.com/wiki/Daisy_(Thomas_%26_Friends)?oldid=7459"
Community content is available under CC-BY-SA unless otherwise noted.