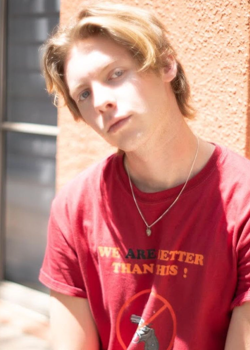 Ryan Lee Ferace was born in 2000 in Boston, Massachusetts. He lived in Boston for a few years before moving to Greenville, South Carolina for about seven years. Ferace moved to Sarasota, Florida in 2009 and took an interest in skate, surfing, politics and the film industry.

In high school, Ferace took Digital Video Production to further his education in film. Since taking the class, he has been involved in the production of numerous short films.

In 2015, Ferace directed and starred in an indie short film titled Safety Patrol, which made it's debut at the Sarasota Film Festival in 2016.

In 2015, Ferace joined the company EATL Films as a secondary cast member. In September 2015, Ferace was cast in a starring role as Wadsworth the butler in the comedy-mystery film, Clue. However, due to many halts on production, the project currently remains shelved.

In 2016, Ferace launched a YouTube channel called Ferace Films to showcase his life. He normally uploads vlogs titled Ferace Files. He has recently stated that he wants to showcase different forms of content on his channel, such as short films and skits.

In December 2016, Ferace was cast in supporting roles as Eagle and Stan on the first season of the EATL Films series The Railway Series.

Retrieved from "https://eatl.fandom.com/wiki/Ryan_Ferace?oldid=7736"
Community content is available under CC-BY-SA unless otherwise noted.