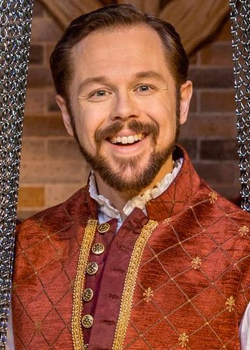 Steven Kynman is one of the main actors of Thomas & Friends, portraying the roles of Butch in the US, as wells as Porter and Jack in the UK, and Duck, Ryan, Paxton, Peter Sam, Charlie, Dart, and the Third Slip Coach in the UK and USA.

Rackstraw was born in Sunderland, England in 1965. Rackstraw has an extensive voice over career over 20 years and is considered to be one of the UK's leading male voice-over actors. He played the main villain Pew in The Legends of Treasure Island, Tod, Ghengis and Farmer Farmer in Foxbusters, Buster and George in The Koala Brothers, Professor Professor in The Secret Show, Mr. Messy, Mr. Noisy, Mr. Fussy, Mr. Tickle, Mr. Happy in the UK version of The Mr. Men Show, Dad in Dennis and Gnasher, Kwazii in The Octonauts and Captain Campion in Watership Down.

In 2012, Kynman was cast as Paxton and Peter Sam in the UK and USA in the sixteenth season of Thomas & Friends. In 2013, he started voicing his most infamous character, Duck, the Pannier Tank Engine, and in 2016, Ryan, the Northern Engine, taking over the role from Oscar winner, Eddie Redmayne. Since joining the cast, Kynman has provided a wide variety of voices in the series, including Porter, Charlie, Dart, Butch, Jack, and the Third Slip Coach.

Retrieved from "https://eatl.fandom.com/wiki/Steven_Kynman?oldid=6673"
Community content is available under CC-BY-SA unless otherwise noted.