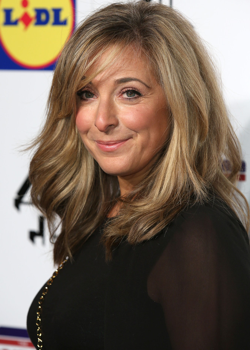 Tracy Ann Oberman is one of the allies of EATL Films. She is also one of the supporting actors of Thomas & Friends, portraying the role of Daisy.

Oberman was born in 1966 in Brent, London, England. Oberman grew up in North London, attending Heathfield School for Girls, before going on to study Classics at Leeds University; however, after a year she moved to Manchester University to pursue drama. After graduating she was accepted into the Central School of Speech and Drama, where she trained as an actor. In 1991, Oberman studied for a term at the Moscow Arts Theatre School as part of her training.

After leaving the Central School of Speech and Drama, Oberman joined the Royal Shakespeare Company. In 1993 she took part in the RSC's award-winning production of Christopher Marlowe's Tamburlaine as "Olympia". This was followed by roles in The Changeling, as "Diaphanta", A Jovial Crew in the part of "Joan Cope", and The Beggar's Opera where she played Molly Brazen. In 1994 she completed her run at the RSC playing in Macbeth and A Christmas Carol. After performing in a number of West End productions, Oberman played at the Royal National Theatre in Waiting for Leftie during 1999. This was followed by a starring turn in School Play at the Soho Theatre. The play was lauded by Michael Billington as a "remarkable" production, with The Guardian critic praising Oberman for her successful portrayal of "Miss Fay" as "the teacher torn between her own career and her pupil's potential".

In 2003, Oberman returned to the National Theatre in Edmond, playing opposite Kenneth Branagh in her debut at the National and his first forray into acting after six years of directing. Her role as wife to Branagh's title character was well received by critics, Norman Miller in a BBC News review commending Oberman for making a particular "impression" despite being only one part out of thirty "whirling through scenes" in a play that runs barely over an hour. That year also saw her star in Hello and Goodbye at the Southwark Playhouse in what would be her final stage performance for four years. The play was highly acclaimed. According to Fiona Mountford in The Evening Standard, the production was "given the outing of its life by" Oberman and her co-star, Zubin Varla. The review in The British Theatre Guide was similarly positive, praising Oberman who "rages away" in the role of "Hester", and delivers "one of the best performances in town".

In addition to the stage, Oberman began working in radio after she left the RSC and has appeared in over 600 radio plays.

Oberman has acted extensively in radio drama and radio comedy, appearing regularly on BBC Radio 4 as a member of the station's unofficial "repertory" company, including; The Way It Is (1998–2001), the leading role in The Attractive Young Rabbi (1999–2002), The Sunday Format (1999–2004), and Getting Nowhere Fast.

Oberman has appeared in many television series including; The Way It Is (2000), Bob Martin (2000–2001) opposite Michael Barrymore, Lenny Henry in Pieces (2000–2001), Big Train (2002), SuperTex (2003) and in episodes of Doctors, The Last Detective, Where the Heart Is, The Bill, Casualty. She played the previously unseen character of Marion in a special half-hour episode of the monologue series Marion and Geoff in 2001. "New Tricks"( BBC1), "The Best of Men" (BBC2), "Toast of London" and "Friday Night Dinner" both for Channel4.

She has also written comedy sketches and an award-winning sitcom for BBC Three, The Harringham Harker.

Oberman was runner up on a celebrity edition of Mastermind (her specialist subject being the "Imperial Roman family"), and scored the highest IQ when she appeared on Test The Nation.

In 2004, Oberman moved away from comedic television to join the BBC's long running soap drama EastEnders, after she was cast as Chrissie Watts, the second wife of "one of the best-loved villains in soap history", 'Dirty' Den Watts. It was a role she played for almost two years, and which brought her "stratospheric fame". Before long, Oberman would become one of the leading stars of the show and at the forefront of several storylines. At the time, though, television critics pointed to Oberman's extensive theatrical background and questioned "why would an actress with such pedigree agree to be in EastEnders?" Oberman has continuously responded by placing the move in the context of her professional exposure, noting her position as a "jobbing actress" at the time and her desire to return to drama after her recent comedic roles. Making her debut on 29 April, Oberman was viewed as an "overnight success" in the role of Chrissie, with Amy Raphael of The Telegraph feeling that the actress "easily upstaged the rest of the cast with her three-dimensional portrayal of a classic soap bitch". In 2005, "18 million people" watched her character kill Den in a fit of rage to mark the 20th anniversary of EastEnders, with Oberman "anchoring" the show's success that year and dominating drama as Chrissie, who "packed into a year what most soap characters do in three."

Oberman has appeared as a guest reviewer on an episode of Film 2007 with Jonathan Ross, as a contestant on a Doctor Who special of The Weakest Link. She was the second one voted off. And as a special guest performer in Tim Crouch's two-hander The Oak Tree at the Soho Theatre. In 2004 she came a close second place on Celebrity Mastermind, specialist subject being The Imperial Roman Family Augustus to Claudius Caesar.

In September 2005, Oberman was a guest on Friday Night with Jonathan Ross. In 2006 she was the guest on Nigel Slater's A Taste of My Life and in 2007 Oberman appeared on BBC One's Saturday Kitchen. She has featured in the BBC Radio 4 show Rudy's Rare Records.

Oberman is also known for her narration of advertisements and documentaries such as Five's I'm A Celebrity: Who Really Won!. She is featured in the video for The Yeah You's debut single "15 Minutes", hosting her own fictional chat show, interviewing the rock band.

Oberman made it through to the quarter-finals of Celebrity MasterChef in 2009 and is a regular panellist on The Wright Stuff.

In 2011, Oberman appeared in Born To Shine singing folk music and playing the guitar.

In 2016, Oberman was cast as Daisy, the Diesel Railcar, in the twentieth season of Thomas & Friends, taking over the role from Teresa Gallagher.

In 2017, Oberman was approached to portray the character Elaine in the first season of the EATL Films series The Railway Series. However, she initially declined due to her contractual obligations with Hit Entertainment.

Retrieved from "https://eatl.fandom.com/wiki/Tracy_Ann_Oberman?oldid=7721"
Community content is available under CC-BY-SA unless otherwise noted.